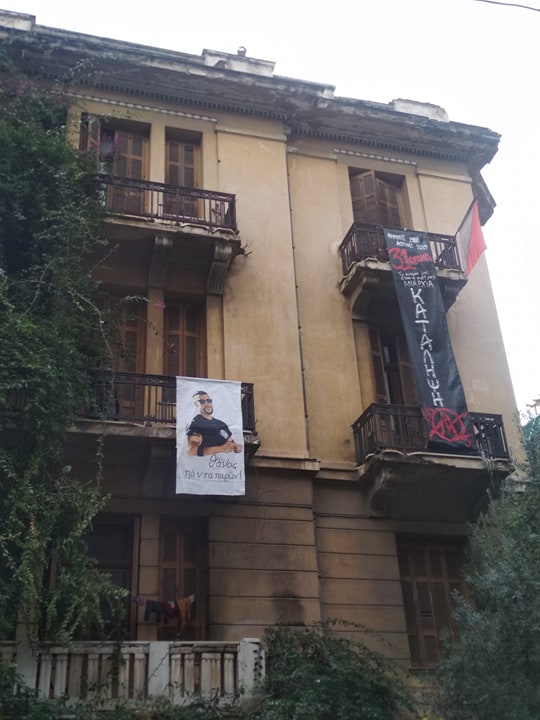 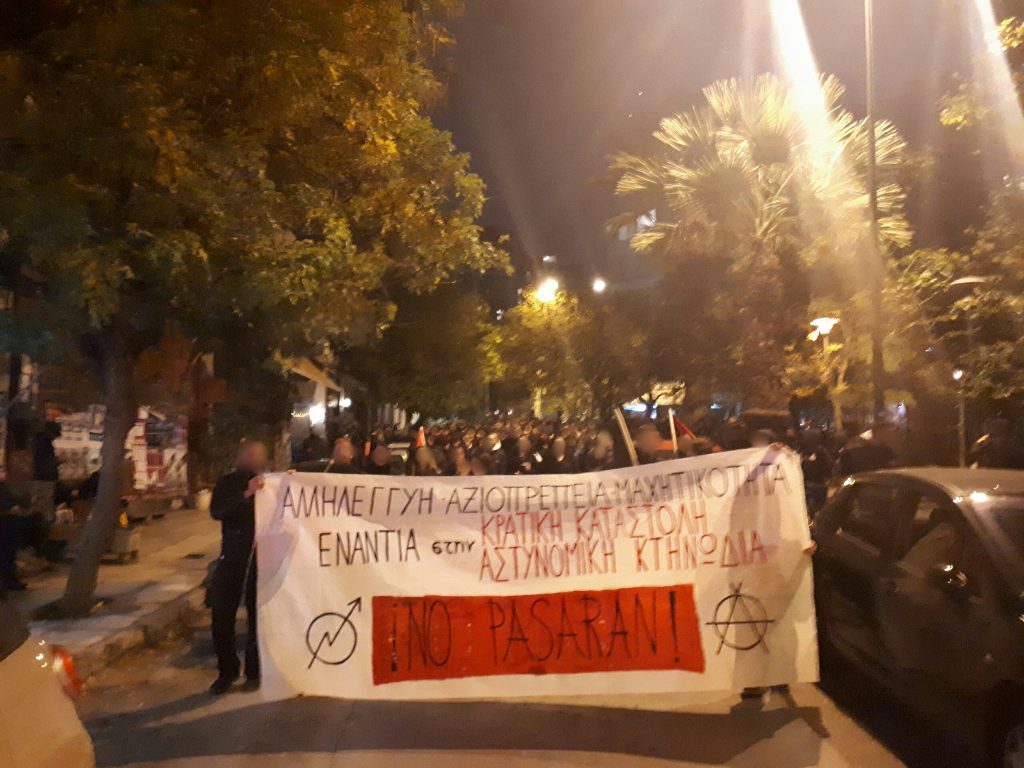 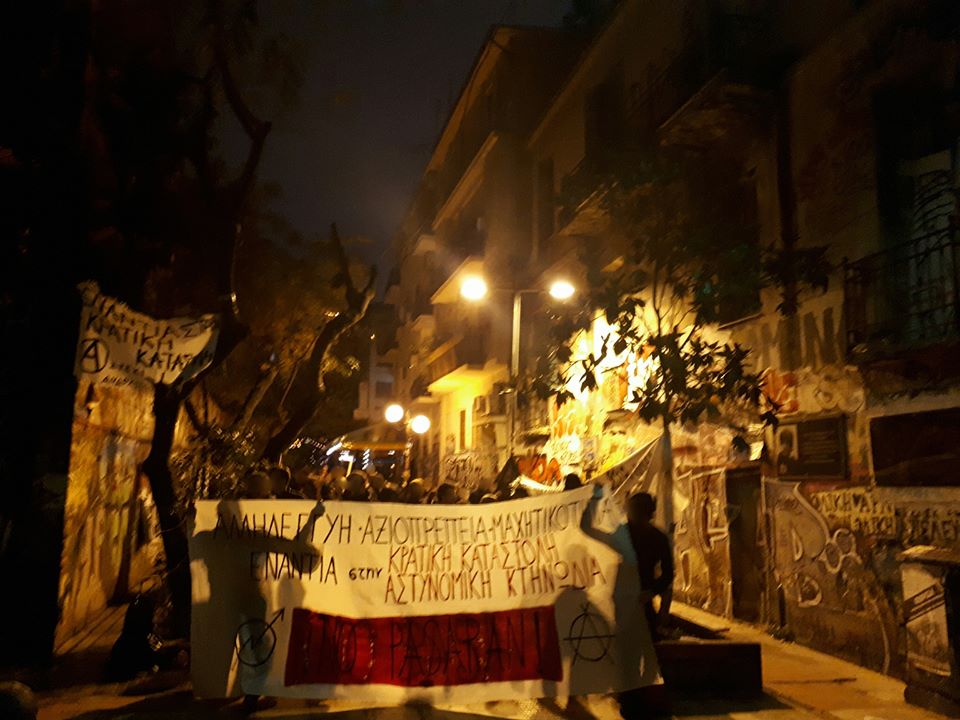 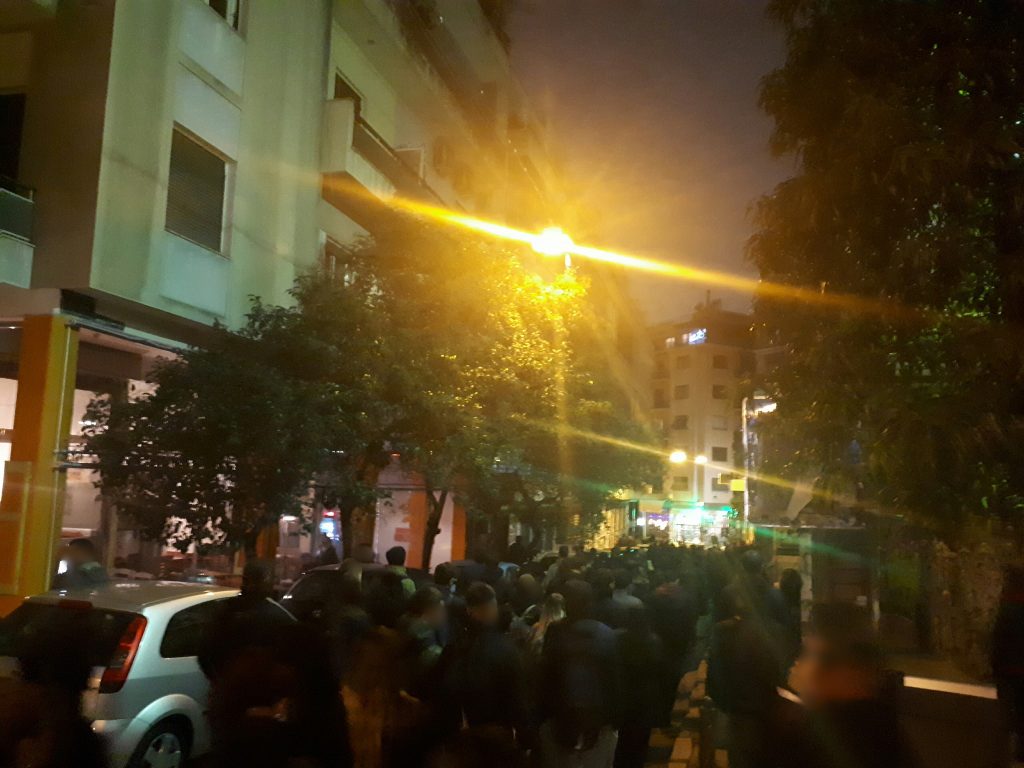 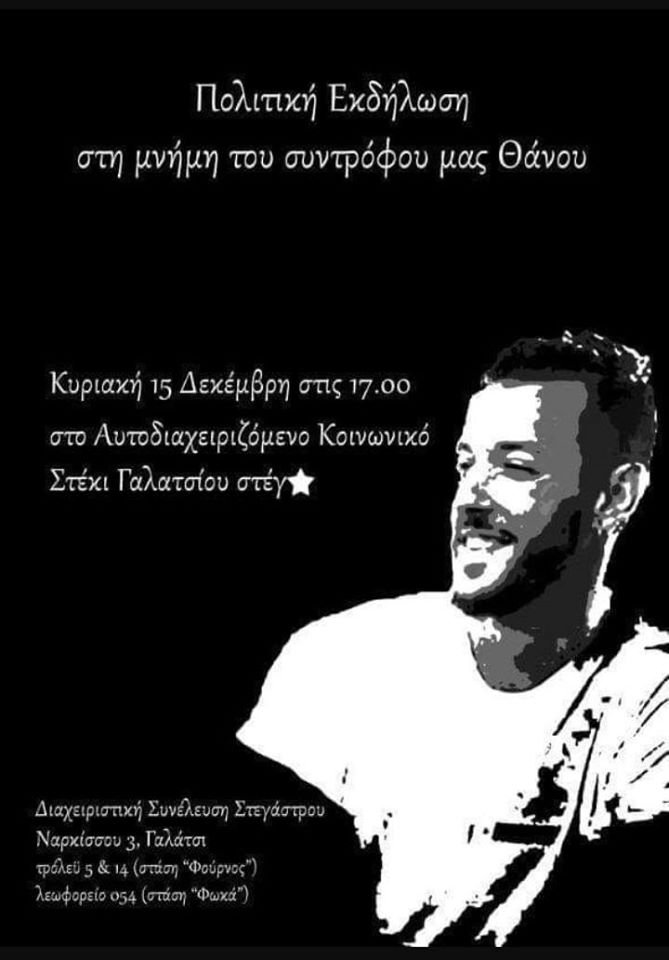 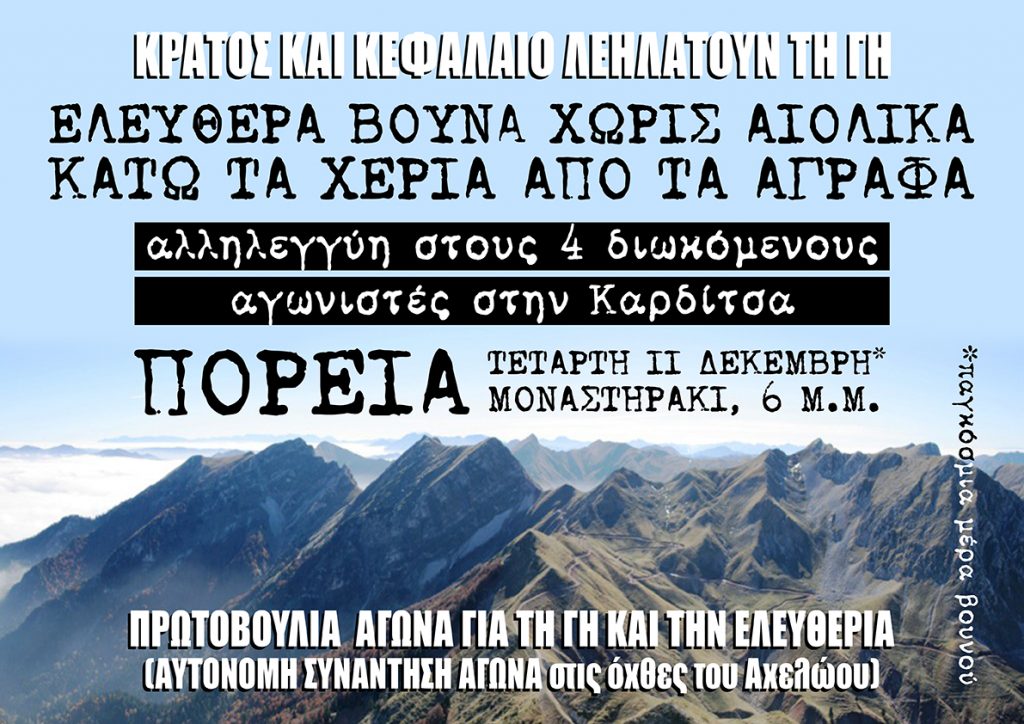 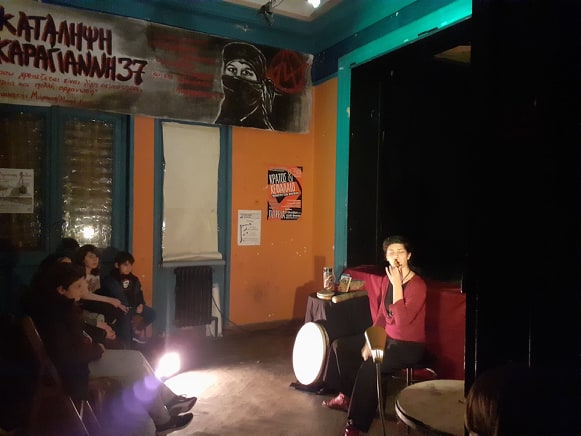 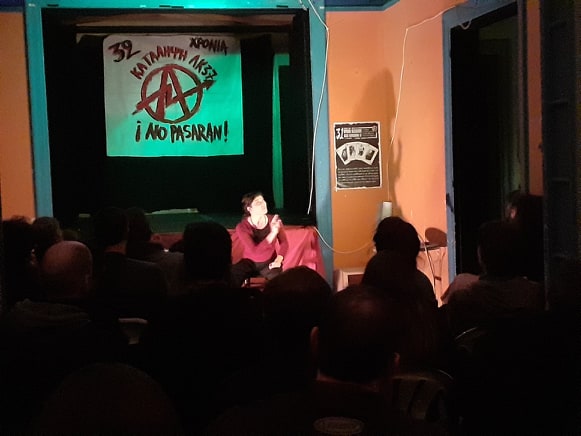 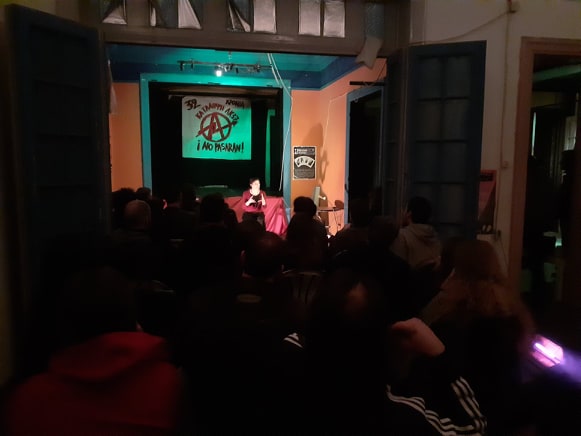 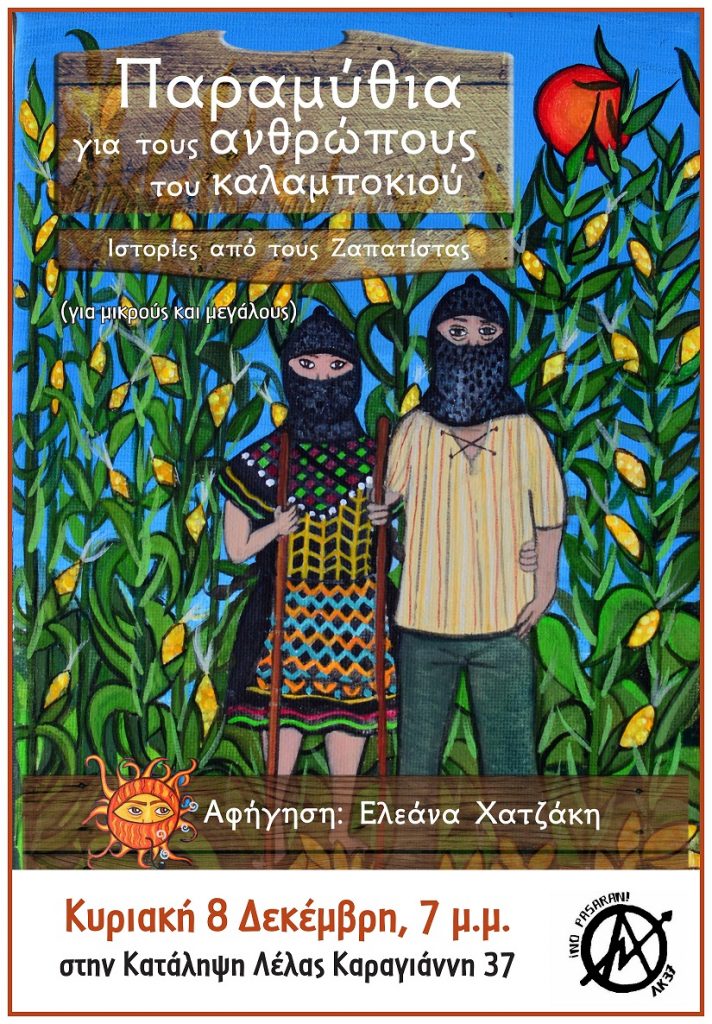 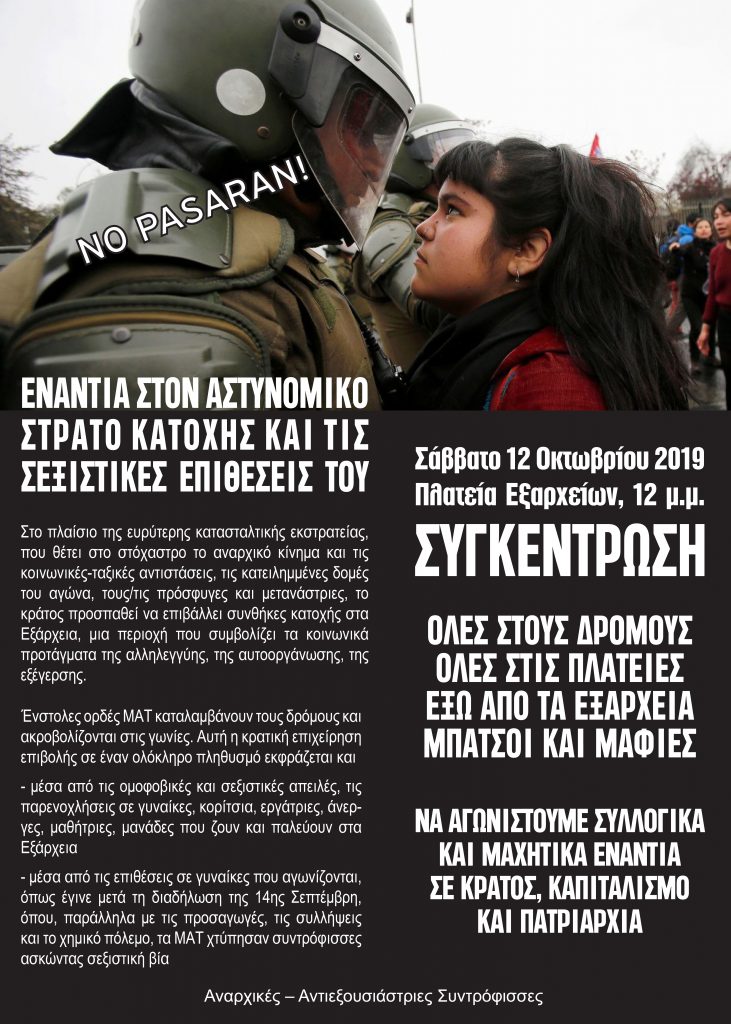 At dawn on August 26th, strong repression forces evicted four squats in the neighborhood of Exarcheia, arrested three squatters and detained 143 refugees and immigrants. While men, women and children refugees were piled in police vans by the armed hooded men of the Special Repression Counter-Terrorist Unit, institutional fascism released its ideological propaganda through the media: a representantive of Greek Police compared the repression forces to a “vaccum” of new technology that will wipe out from Exarcheia “the disturbing dust”, the refugees and immigrants, and afterwards the real “trash”, the anarchists, announcing the continuation of the repressive operation and their declared target. 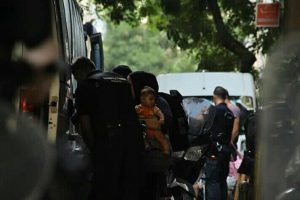 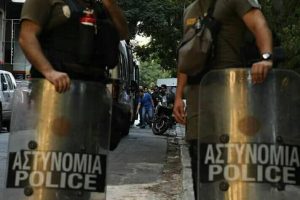 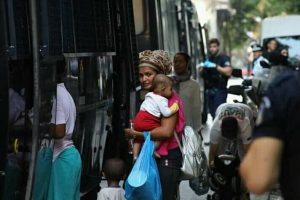 The recent police invasions are a first manifestation of the repressive campaign, announced by state officials, against the anarchist movement, the squats, the self-organized structures of housing immigrants and refugees, the world of solidarity, social and class resistance in general. A repressive campaign that consists the spearhead of the state and capitalism’s attack on the plebeians of society, aiming to terrorize them and neutralize resistance, in order to proceed uninterruptedly to the onslaught of state and capitalist brutality. The elections of July 7th marked the continuation of the imposition of suffocating living conditions for the workers and the unemployed, the imprisonment of immigrants and refugees in concentration camps and the deaths in the borders, the intensification of the looting of social wealth and nature, the attempt to establish the state of emergency. The government of New

Democracy is building on the attempted neutralization of social and class struggles and the tens of repression attacks against squats during the administration of SYRIZA, promising to crush the people of the struggle – to all those that have stood and are still standing against the plans of the authority.

Part of this anti-revolt strategy is the declared aim to occupy Exarcheia – (a neighborhood which bears a deep culture of challenging authority and a great historical and political weight that has been attributed by the struggles of thousands of people. For the period of Nazi occupation, the events of December 1945, the Junta, till the revolt of December 2008 and the large mobilizations of resistance against the imposition of even worse living conditions during the following years, till this day. This is the reason why the neighborhood of Exarcheia is an important ground for the development of social and class resistance at the center of the city. It is a thorn in the state’s attempt of imposing itself on society and control the city, causing the long-lasting wrath of state officials and numerous repressive operations over the last decades.* A neighborhood inextricably connected to the anarchist-antiauthoritarian movement, which, over the last years, with the mass arrivals of people persecuted by the war conflicts, revived solidarity and mutual-help, through numerous housing squats. A neighborhood that the state attempted to control through the establishment of drug-mafias and the effort to impose social cannibalism all these years). Part of the same anti-revolt campaign is the eviction of squats – one of the state’s long-lasting intentions especially after the social revolt of 2008 – and the abolition of university asylum, revealing the dominants’ fear of enclaves which have functioned in the past and still function as a spark to the development of social dynamics, strong enough to wipe out their arrogance. And if the message that the government is sending through the release of the murderer cop Korkoneas, through the reinforcement of their legal arsenal against the people of the struggle and the ongoing repressive attacks is that their murderous violence will extinguish the flames of revolt, in order to go on destroying society unhindered, we know that: No threat could ever eradicate solidarity, erase the desire to live a life without masters and slaves, without states and borders, or crush the struggle.

The announced repressive attack started by cutting off electricity in the housing squat for refugees “Notara 26” and the attempt to do the same in the housing squat for refugees “Oneiro” in Exarcheia, continued with the demolition of squat Brooklyn in Ioannina and was advertised through numerous articles in the media. Against this repressive campaign, we participate along with other comrades from squats, self-organized structures and political collectives (Spirou Trikoupi 17, which was evicted on August 26th, is one of them), in the assembly NO PASARAN!, in order to defend collectively and dynamically the spaces of the struggle, and to declare against the state’s threats that there will be no surrender and no truce. In this context, we have co-organized public mobilizations-gatherings at Lelas Karagianni 37 squat (August 8th), at Notara 26 housing squat for refugees and immigrants (August 7th), the Spirou Trikoupi 17 housing squat for refugees and immigrants (August 13th) and lastly K* Vox squat (August 20th). In the same spirit, we are calling a demonstration in the neighborhood of Exarcheia this Saturday, August 31st, at noon and a central demonstration in the center of Athens on the 14th of September.

Posters of the NO PASARAN assembly 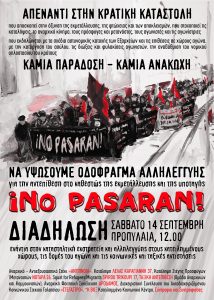 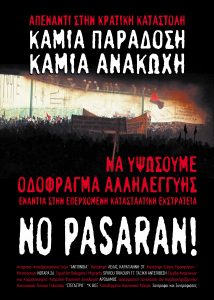 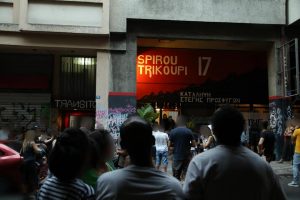 After the evictions of the four squats, a first response was given by a protest called by Spirou Trikoupi 17 outside of the neighboring squat of Notara 26 and the demonstration of hundreds of people to the police lines in front of the evicted squats of Spirou Trikoupi. While people were shouting slogans, comrades climbed the sealed building of S. Trikoupi 17 and hanged a banner behind the police lines, saying YOU CAN’T EVICT A MOVEMENT.

Photos from the mobilization outside Notara 26 squat, from the demonstration called by Spirou Trikoupi 17, on August 26th 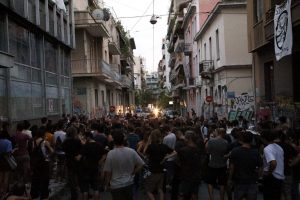 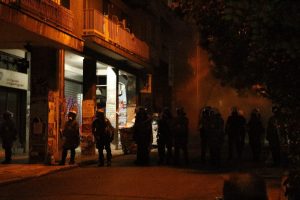 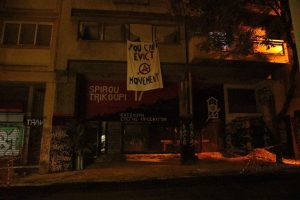 We call the anarchist comrades and members of squats, all those who struggle against the global dictatorship of the state and capital in every corner of the world to support the NO PASARAN campaign, the struggle for the defense of squats, refugees and immigrants and the counter-attack against state repression.

Against our common enemies and in every point where repression takes place, we should counter-pose internationalist solidarity, our common struggle which will overturn the decayed world of authority and will open the way to Social Revolution, for the creation of a world of equality and freedom.

AGAINST STATE REPRESSION, WE RAISE BARRICADES OF SOLIDARITY

NO SURRENDER – NO TRUCE !

no nostalgia for this decayed world that, for so long now, belongs to the past. No compromise with the unbearable present that promises only the worst. No hesitation and fear for the future we desire:

* Abstract from a statement of the Assembly for the Reappropriation of Exarcheia, 25/7/2019.

We call for a gathering today at 6pm in Notara.
Solidarity is our weapon. No pasaran!

The fascist state evicted us today at 06:00 and they move us to Petrou Rali police station. They put us out of our house. They are taking our stuff out of the building and closing the door and blocking the entry and the windows.
They are trying to bury us. They don’t know we are seeds. 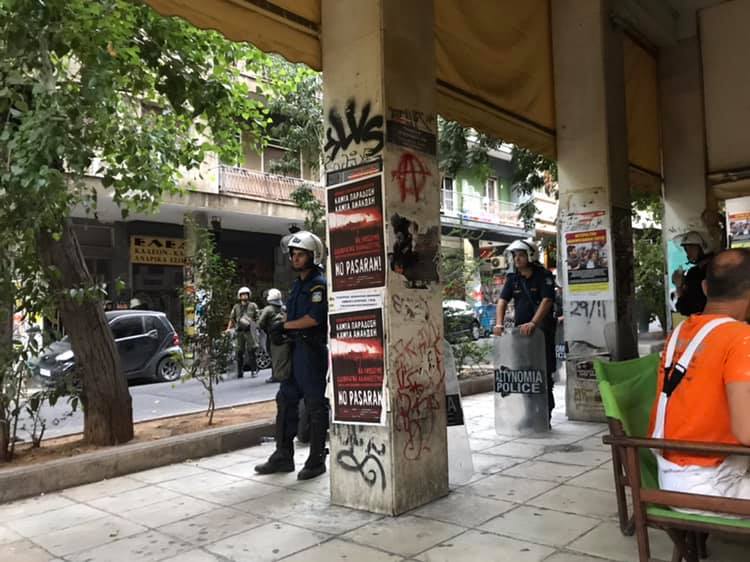 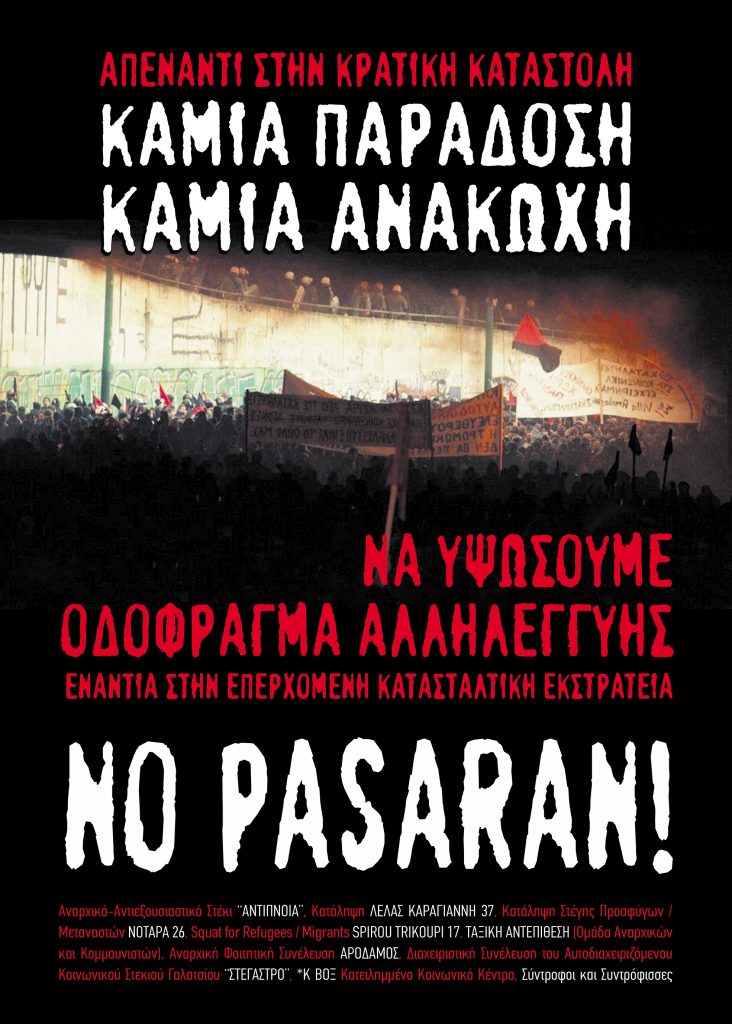 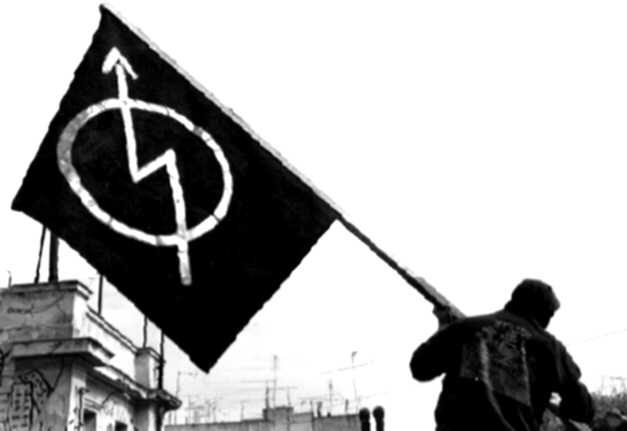